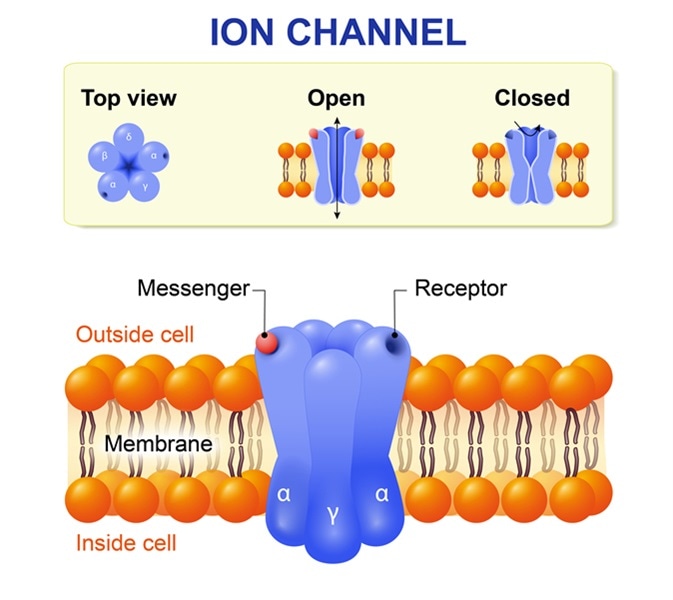 Voltage-Gated Ion channel, a protein expressed by virtually all living cells that create a pathway for charged ions from dissolved salts, including sodium, potassium, calcium, and chloride ions, to pass through the lipid cell membrane that would otherwise be raincoat. The function of the cells of the nervous system, the contraction of the heart and skeletal muscle, and the secretion of the pancreas are examples of physiological processes that require ion channels. In addition, ion channels in the membranes of intracellular organelles are important in regulating cytoplasmic calcium concentration and acidification of specific subcellular compartments (eg, lysosomes).

The ions passively flow through channels toward equilibrium. This movement can be driven by electrical (voltage) or chemical (concentration) gradients. The ability to alter ion flux as a result of ion channel development may have provided an evolutionary advantage by allowing single-celled organisms to regulate their volume in the face of environmental changes. Through subsequent evolution, ion channels have come to play essential roles in cell secretion and electrical signalling.

Most ion channels are gated, that is, they open and close spontaneously or in response to a specific stimulus, such as the binding of a small molecule to the channel protein (ligand-gated ion channels) or a change in voltage through the membrane which is detected by charged segments of the channel protein (voltage-gated ion channels). Furthermore, most ion channels are selective and only allow certain ions to pass through. Some channels conduct only one type of ion (eg, potassium), whereas other channels exhibit relative selectivity; for example, they allow passage of positively charged cations and exclude negatively charged anions. Cells in higher organisms can express more than 100 different types of ion channels, each with different selectivity and activation properties. 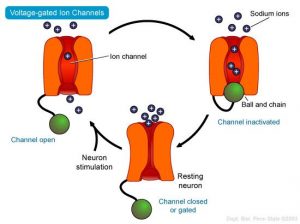 The amino acid sequences of many different ion channel proteins have been determined, and in some cases, the X-ray crystal structure of the channel is also known. Based on their structure, most ion channels can be classified into six or seven superfamilies. For selective potassium channels, which are among the best-characterized ion channels, four homologous transmembrane subunits come together to create a tunnel, known as a conducting pore, that provides a polar pathway through the nonpolar lipid membrane.

Other types of channels require three or five homologous subunits to generate the central conducting pore. In solution, the ions are stabilized by polarized water molecules in the surrounding environment. The highly selective, narrow ion channels mimic the water environment by lining the conducting pore with polarized carbonyl oxygen atoms. Less selective channels form pores with a diameter large enough for ions and water molecules to pass through together.

Many natural toxins target ion channels. Examples include tetrodotoxin, a voltage-gated sodium channel blocker, which is produced by resident bacteria in pufferfish and various other organisms; the irreversible antagonist of the nicotinic acetylcholine receptor alpha-bungarotoxin, derived from the venom of snakes of the genus Bungarus (kraits); and plant-derived alkaloids, such as strychnine and D-tubocurarine, which inhibit the activation of ion channels that open the neurotransmitters glycine and acetylcholine, respectively. In addition, a large number of therapeutic drugs, including local anaesthetics, benzodiazepines, and sulfonylurea derivatives, act directly or indirectly to modulate ion channel activity.

Inherited mutations in ion channel genes and in genes encoding proteins that regulate ion channel activity have been implicated in a number of diseases, including ataxia (the inability to coordinate voluntary muscle movements), diabetes mellitus, certain types of epilepsy and cardiac arrhythmias (irregularities in the heartbeat). For example, genetic variations in selective sodium and potassium channels, or their associated regulatory subunits, underlie some forms of long QT syndrome. This syndrome is characterized by a prolonged depolarization time of cardiac myocyte action potentials, which can lead to fatal arrhythmias. In addition, mutations in the adenosine triphosphate (ATP)-sensitive potassium channels that control insulin secretion from cells of the pancreas underlie some forms of diabetes mellitus.

Role in the investigation

Ongoing basic research on ion channels seeks to understand the structural basis of permeability, ion selectivity, and activation at the molecular level. Research efforts also attempt to answer questions about the cellular regulation of ion channel protein synthesis and about the subcellular distribution and ultimate degradation of the channels. Furthermore, compounds with higher specificity and potency for channels involved in pain sensation, cardiovascular diseases and other pathological conditions are potential sources for drug development.