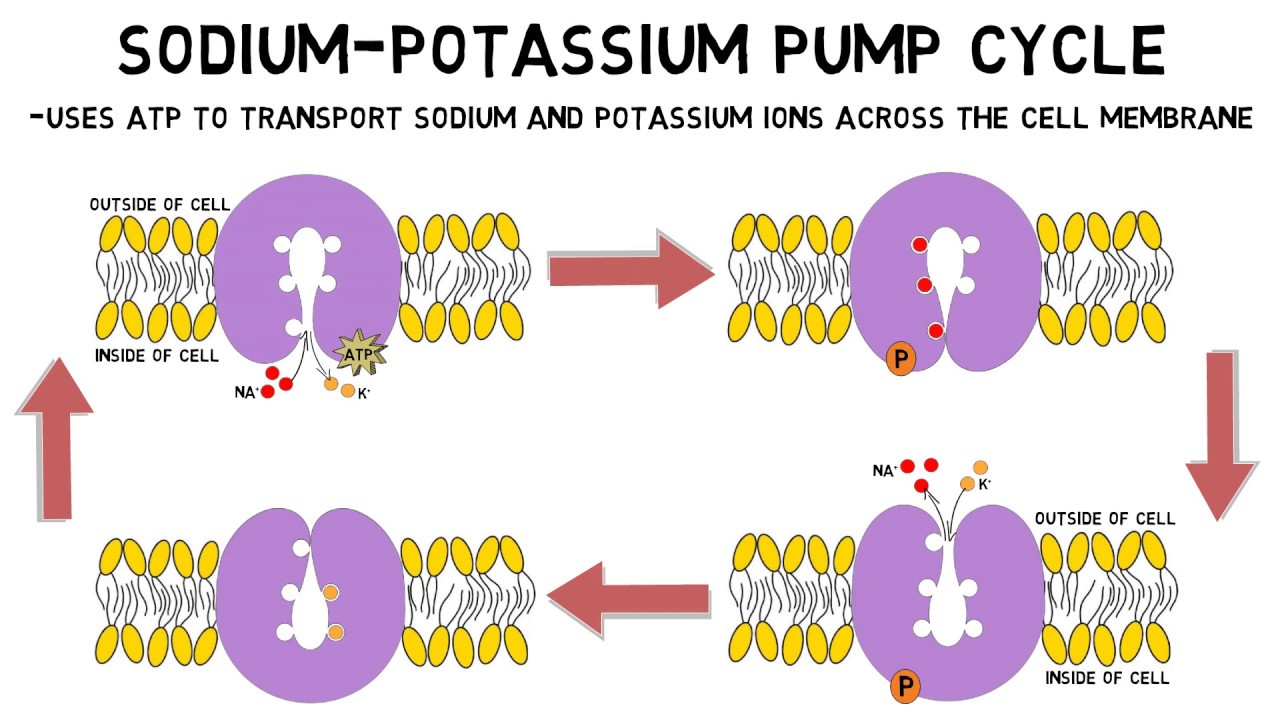 This mechanism is the Active Transport: The sodium-potassium pump. Actually, a large protein molecule spanning the neuron’s plasma membrane, the pump features receptor areas for both the cytoplasm and the extracellular environment. The part of the molecule facing the cytoplasm has a high affinity for Na+ and a low affinity for K+, while the part facing outwards has a high affinity for K+ and a low affinity for Na+. Stimulated by the action of the ions on their receptors, the pump transports them in opposite directions against their concentration gradients.

If the pump transported equal amounts of Na+ and K+ across the membrane, the net charge transfer would be zero; there would be no net flow of current and no effect on the membrane potential. In fact, three sodium ions are transported in many neurons for every potassium ion; sometimes the ratio is three sodium ions for every two potassium ions, and in some neurons, it is two sodium ions for one potassium ion. This ion transfer inequality produces a net output of positive charge, maintaining a polarized membrane with the inner surface slightly negative relative to the outer surface.

Because it creates this potential difference across the membrane, the sodium-potassium pump is said to be electrogenic. The sodium-potassium pump carries out a form of active transport, that is, it’s pumping of ions against their gradients requires the addition of energy from an external source. That source is adenosine triphosphate (ATP), the cell’s main energy-carrying molecule. ATP is made up of an inorganic phosphate molecule held in a high-energy bond with an adenosine diphosphate (ADP) molecule. When an enzyme in the pump, called sodium-potassium-ATPase, splits phosphate from ADP, the energy released drives the transport activity of the pump. 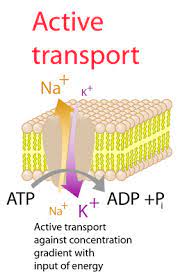 The sodium-potassium pump sets the membrane potential of the neuron by keeping Na+ and K+ concentrations in constant imbalance. The sudden change from a resting to an active state, when the neuron generates a nerve impulse, is caused by a sudden movement of ions across the membrane, specifically, a flux of Na+ into the cell. Given the relative impermeability of the plasma membrane to Na+, this influx implies a sudden change in permeability. Beginning in the 19th century, researchers wondered about the mechanism by which this change might occur. The idea arose that there must be pores, or channels, through which ions could diffuse, crossing the barrier represented by the lipid bilayer.

However, for years only the gross currents accompanying ion movement could be measured, and only by inference could the presence of membrane channels be postulated. The breakthrough came in the 1970s and 1980s with the development of the patch-clamp technique, which allowed researchers to directly measure currents flowing through single ion channels in the membrane. The patch-clamp technique electrically isolates a small patch of neuron or muscle cell membrane by applying the tip of a micropipette filled with conductive solution to the membrane and forming an airtight seal with it.

As the individual channels in the patch undergo various transition states between fully open and fully closed, the opening and closing times are recorded and the amplitudes and duration of the currents are measured. Since the pioneering studies, the electrical and biochemical properties of certain channels have been characterized. Known as “voltage-gated” when activated by changes in membrane potential and “neurotransmitter-sensitive” when activated by neurotransmitter substances, these channels are protein structures that span the membrane from the extracellular space to the cytoplasm. They are thought to be cylindrical, with a hollow water-filled pore wider than the ion passing through it, except for a region called a selectivity filter. This filter makes each channel-specific to one type of ion.

Voltage-sensitive sodium channels have been characterized with respect to their subunit structure and their amino acid sequences. The main protein component is a glycoprotein containing 1,820 amino acids. Four similar transmembrane domains, each about 300 amino acids, surround a central aqueous pore through which ions pass. The selectivity filter is a constricted channel surrounded by negatively charged carbonyl oxygens, which repel anions but attract cations. It is also believed that within the channel there are two types of charged particles that form the gates that control Na+ diffusion.

One gate closes on polarization and opens on depolarization; the other closes on depolarization. The resting activated and inactivated states of the sodium channel are believed to be due to voltage-dependent conformational changes in the glycoprotein component. These changes result from the effects of the electric field on the charges and dipoles of the amino acids within the protein. When a large electric field is applied to it, the protein has been observed to change its conformation from a closed and stable resting state to an open and stable state in which the net charge or location of charge on the protein changes.

There are several types of voltage-gated potassium channels, each with its own physiological and pharmacological properties. A single neuron can contain more than one type of potassium channel. The best known K+ flux is the outward current that follows membrane depolarization. This occurs through the delayed rectifier channel (IDR), which, activated by Na+ entry, counteracts the effect of that cation by allowing K+ discharge. By repolarizing the membrane in this way, the IDR channel restricts the duration of the nerve impulse and participates in the regulation of repetitive firing of the neuron.

Another K+ efflux current, which occurs with little delay after depolarization, is the A current. IA channels open by depolarization after afterhyperpolarization. By increasing the interval between action potentials, they help a neuron fire repeatedly at low frequencies. Another type of potassium channel, the IK(Ca) channel, is activated by high concentrations of intracellular Ca2+. The opening of these channels results in hyperpolarization of the membrane so that they appear to slow down the repetitive firing of nerve impulses.

The IM channel opens by depolarization but is deactivated only by the neurotransmitter acetylcholine. This property may serve to regulate the sensitivity of neurons to synaptic input. A final type of potassium channel is the anomalous or internal rectifier (IIR) channel. This channel closes with depolarization and opens with hyperpolarization. By allowing unusual inward diffusion of K+, the IIR channel prolongs neuron depolarization and helps produce long-lasting nerve impulses.